A Mac User’s Opinion of Linux 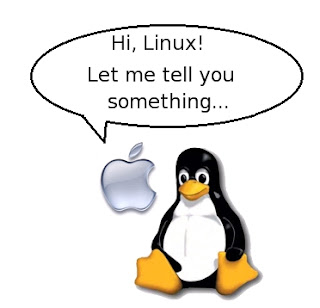 When talking about Operating Systems, I always develop my rants mainly around GNU/Linux and Windows. I’ve criticized Linux fans, some Linux distros, and I’ve been harsh on Windows. However, I’ve never talked about Apple’s MAC OS X. The reason? Well, I’ve never been near enough a Mac and I doubt I’ll buy one any time soon. Besides, I don’t really like to talk about what I ignore…that spells trouble! The same reason motivates me to keep silent about FreeBSD, Chromium, UNIX, and other Operating Systems, although I feel somewhat more willing to try those.

Now, some days ago, I was reading a post that compared Linux and Windows Vista/7 and I found among the comments one that caught my eye. It was a criticism towards Linux made by a Mac user named Jwcorey. I cannot say that his opinion stands for the way all Mac users view Linux (neither did he claim to be doing that), but I decided to transcribe it here because both his appraisal and criticism of Linux are level-headed and worthy to be read:

I can only speak from a personal perspective. There’s no evangelism here in my comment; just me chatting. I use OS X, but I’m familiar with both Windows and Linux.

Where Linux works well: The stability and resistance to viruses or hacking is really nice. You’re not going to enjoy anything even close to it with Windows. After 15 years of «modern» Windows builds, I have given up on expecting something from Windows that can rival Linux in these areas. It just plain doesn’t stack up.

It’s also way faster and can breathe new life into old machines you’d think would never return from the dead. A lot of people switch to Linux just so they can pull out an old PC and make it feel like a new one.

If I had to sum up the Linux experience in a concise way, I’d say it’s like using a basic os, but without the bullsh*t. You can do what you feel like doing without having to worry about some corporation blocking you because of some money or license-based reason. With both Apple and Microsoft having very dark histories of trying to catch the user by the throat and take away all his options, Linux is a breath of fresh air. Nothing is ever forced on you. As long as you don’t mind taking the time to figure out how, you can do anything or use anything you feel like doing or using. The system is made by users, not by businessmen. And some of those users are pretty damned smart, too.

There were two really huge problems with Linux that I encountered. Linux fans don’t particularly love hearing them brought up, but they need to be said.

Linux generally comes with a nice cross-section of useful applications, such as browsers, chat programs, mail, text editors, MP3 players, movie players, etc. And that’s great. But, as you know, many of us like slightly specialized software from time to time… and this is one area where Linux has trouble meeting the challenge. There are certain things that just plain don’t exist on Linux (like, for instance, World of Warcraft. No matter what you’re told, there’s nothing on Linux like that), or the Linux equivalents just don’t give you everything you need. They may plug some holes, but it’s just not the same (GIMP comes to mind). I’ve heard Linux advocates argue that you can do everything on Linux that you do on other systems, but don’t believe it. Depending on your needs, you may be able to do more than enough… but not the same things.

The other thing you’ll notice is that Linux is almost never «done». There’s always something not quite finished. Sometimes it’s menu items that aren’t there but should be. Sometimes it’s support for certain hardware. The missing stuff often gets done and added over time, but you have to bear in mind that the work is performed by volunteers who do it mainly in their spare time when they can. It’s very different than the team of monkeys Microsoft (or Apple) have on the job who are constantly whipped until they get it finished. You can’t just say «God dammit, Linux. Fix this problem or I’m taking my money elsewhere» because there’s no money, and there’s no one specific person to yell it at.

I keep getting this feeling about Linux that, as the years go by, it’s only going to become more and more important and powerful… and definitely an alternative to the mainstream systems. I don’t think we’re there yet, but its potential is very high. I always keep an eye on what Linux is doing, but I stick with OS X for now for personal reasons. No matter which operating system you pick, there will always be someone telling you that you’ve made the wrong choice… so you might as well use the one you like.

He made a valid point, I’d say. To his last words, I’d just add «and the one that best fits your needs as far as its performance and your use of it keep other people’s computers safe enough.» Nobody likes his/her equipment to be infected because of another person’s poor security standards, believe me. I always stress the idea that using a computer is not purely a matter of personal comfort, pretty effects, fast performance, or nice games. Computer users must be aware of the threats the OS of their choice may be victim of to act accordingly. That «I didn’t know my USB had a virus» excuse is a real problem for others, you know?